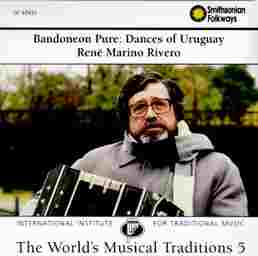 
Review by Gregory A. Vozar:

There is no other free-reed instrument quite like the bandoneon! For perhaps a century it has been the mainstay of Tango ensembles - its throaty groans and growls seem perfectly suited to the expression of pathos and dark emotions. Having so well established itself in this role, it is surprising and refreshing to find the instrument capable of a more varied and articulate musical palate. Of the twenty-four selections that René Marino Rivero plays on Bandoneon Pure: Dances of Uruguay, only three are tangos. The solo repertory on this album covers a broad cross-section of popular Uruguayan dance music from the middle decades of the Twentieth Century.

As the extensive and informative booklet that accompanies this recording indicates, there is more to the bandoneon than Tango and the porteńo culture of the seaports Buenos Aires and Montevideo. Indigenous Uruguayan dances remain virtually unplayed outside their country of origin while provincial styles have been eclipsed by Tango as a national symbol of Argentina. One purpose of Bandoneon Pure: Dances of Uruguay is to document and bring this lesser-known musical culture to the rest of the world. René Marino Rivero is a natural choice for ambassador. A seasoned musician today, he began playing the bandoneon 'by ear' during his childhood in the Uruguayan departamento of Tacuarembo. His formal conservatory study of the instrument began in 1950 at fourteen years of age and continued up to 1965 when he left the provinces for the capital, Montevideo.

Before considering the music, it would be appropriate to include a brief note concerning this somewhat mysterious instrument about which even free-reed players seem to know little.

The bandoneon arrived in South America in the hands of the middle-European immigrants who flocked to the Rio de la Plata area during the late nineteenth and early twentieth centuries. In spite of the apparent difference between this breathing reed-box and the ubiquitous Latin guitar, it quickly integrated itself into the indigenous musical culture, spreading south and west through Argentina, north into Uruguay, Paraguay and even Southern Brazil.

The modern bandoneon is a large, square German concertina made in a basic 130-note button pattern. There are also two expanded versions (142 and 150 notes). The instrument favored in South America always has two reeds per note, tuned completely dry or beatless. One reed gives the basic pitch; the second reed gives the note an octave higher. In contrast, other German concertinas (Chemnitzer) may have anywhere from two to five reeds per note and may be tuned from dry to wet. Most of these instruments are bi-sonoric; i.e., the buttons give different notes on press and draw. A fully chromatic or uni-sonoric model was made for the European market, but was little used in S. America. The bandoneon is very difficult to play well; the heavy instrument generally rests on the knees while being played and the sinuous bellows are hard to control. Even the best of performances may lack smoothness.

The idiosyncratic album title, Bandoneon Pure, embodies its second purpose: presenting the sound of the instrument and music in its purest form, without any electronic modulation, echo, studio overdubbing or digital alteration. What you hear is what you get. There is something to say for this kind of bald authenticity, especially when presenting folk or indigenous material that differs from the listener's own music culture. Uruguayan music, however, stems from the same the roots as most European and North American music, nothing here will be inaccessible to listeners who comprehend the music from either of those areas.

Unfortunately, I must confess this album was quite a disappointment to me the first time I listened to it. I find the sound of the bandoneon absolutely magnetic (Seńor Rivero's instrument being one of the finest I have ever heard), and I looked forward to hearing music rarely played outside of Uruguay. Alas, the performance is simply not up to par. The artist has some real problems with his material in spite of having known and played these dances for decades. Bungled fingerings, rhythmic inconsistencies, and bellows jerks abound in the more complex pieces. Stylistic differences aside, there are general rules of good playing that apply to all musical instruments and some of them are simply ignored here.

I will grant that communicating the emotional content of music is of prime importance, and occasionally that gives a musician license to transgress the bounds of good technique. There is no doubting the emotional content of René Rivero's playing! One can hear that this is his music and culture; we listen here to his alma uruguaya, his soul. At times these dances can have the same impact as some of the raw blues recordings made in the USA during the 1930's. Were Seńor Rivero an amateur performer playing weekend country dances, this recording might be acceptable as a document of folk music. He is, however, a composer and professional musician and has recorded his own compositions in S. America and Europe. What is more, these dances are not "folk" music in the usual sense. Many of them are rhythmically complex, harmonically sophisticated compositions that require more care in the preparation and presentation than they are given here. Rivero's fellow countryman, bandoneonist Hugo Diaz, may have evolved a more distinctive, jazz-like style, but his readings of some of the same pieces are cleaner and technically more secure.

In spite of these defects, I can also state that after subsequent listening, I warmed a bit to this recording and the enthusiasm of Seńor Rivero's playing. As a document of a living instrument and musical style, it stands virtually alone on the record shelf. The accompanying booklet is packed with detailed information about the bandoneon, its history, construction, playing technique and bellows operation - all supported by illustrations! Ditto the music and performer. Some of the information within those eighty-plus pages can probably be found nowhere else. This alone is worth the price of the CD.

Bandoneon Pure: Dances of Uruguay is best destined for the record library of the aficionado or fan of the instrument. For anyone interested in Tango and the culture that nurtured it and was nurtured by it, this disk is a necessity. Those who want to hear a "Stradivarius" of a concertina might also consider this disk. The sound is unprocessed electronically, even to the point that a few louder passages cause distortion on the analog master tape. (A totally digital recording would have avoided this problem). I can live with these few 'blasts' because the quieter passages capture more color and shading than I have ever heard on a bandoneon recording. For even the curious free-reed fans who want to add an unusual CD to their collection, I'd also recommend the disk. The fastidious, however, may be disappointed by the Rivero's off-the-cuff and sometimes slap-dash approach to his material.

I have read your reviews and agree basically with your opinion. However, it seems to me that you may not have understood the microrhythms which you thought to be a rhythmic inconsistency. These are a characteristic of Uruguayan music. It may be that European or North American ears are so trained to hear a stable beat that [normal] deviations seem out of place. I remember how long it took for European musicians to play jazz because of that very reason.

I consider Marino Rivero the most versatile bandoneonist today, together with Alejandro Barletta. Rivero, a pupil of Barletta, found his way to classical and avant-garde music as well. Hugo Diaz learned his technique from Marino Rivero but turned to Tango. Perhaps you should hear Rivero's interpretations of Bach's Fugues to judge his technique. No one else is able to play that on a bandoneon.

In general, opinions about Marino Rivero are fairly diverse, and I think this is fundamentally a matter of the way one listens to the music.

Seemingly simple melodies are at times overloaded with ornaments, to the point that they detract from the basic theme. This requires extra attention from the listener. In the same way, the themes of his abstract music aren't easy to assimilate. It's new music. For example, I'd say that his CD "Fantoches" doesn't please the first time one plays it. However, after several listenings, it begins to reveal the underlying emotions; dissonance becomes transformed into colors, it's as if one were dreaming, then one can perceive the theme with great intensity. This music can't be measured along side the traditional. The listener must cooperate. It's like abstract painting: we must adjust our senses.